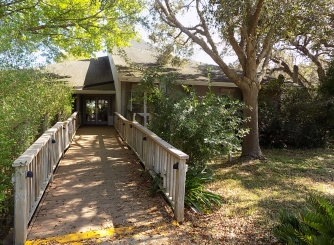 A winding road leads you to the Visitor Center at the Merritt Island National Wildlife Refuge in Titusville. Stand inside a replica of a Bald Eagle Nest that is 2 feet deep and 5 feet across made of interwoven sticks, grasses, and moss. Bald Eagles mate for life and lay 2 eggs a year.

The Bobcat remains elusive and the Gopher Tortoise creates a borrow that provides shelter for a large number of animals. Storyboards throughout the center describe the different species of animals in the refuge and the varied habitats allow different species to survive. 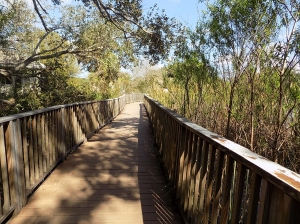 Look out to the freshwater pond while standing under a gazebo and view the turtle on a ramp basking in the sun. Walk along the quarter-mile boardwalk and read the many plaques that describe the different trees, plants, berries, and vines. The Timucua and the Ais early Native American tribes used the bark of the trees for medicinal purposes. Native Americans crushed the leaves of the American Beautyberry to repel insects. The Timucua smashed the acorns of the Live Oak Trees to make bread. The fruits of the trees provide food for the many animals in the refuge. The Virginia Creeper a climbing vine that provides food and shelter for the songbirds.

Walk underneath the trestle to the Butterfly Garden. Different varieties of butterflies surround the garden. Host and Nectar plants in abundance. Six trails that offer opportunities to explore many habitats and the different species of wildlife.

Browse the gift shop for books on birds, butterflies, Manatees and watercolor prints as well as the usual items found in gift shops. Fees and hours of operation on the website.

Sharp Family Tourism and Education Center located at 840 Johnson Way in Lakeland. The education center housed in a 1925 Sears Catalog Home.  During the Great Depression Frank Lloyd Wright commissioned to design thirteen buildings on the campus of Florida Southern College the only college in the United States designed by him.

Designed by Frank Lloyd Wright in the late 1930s the Usonian House built in 2013 adjacent to the Sharp Family Tourism and Education Center. Sit on a bench and admire the bronze sculpture of Frank Lloyd Wright and fountain that surround the Ruthven Family Plaza. Browse in the gift shop for an unusual assortment of items for sale. Purchase guided tours online or in the Sharp Family Tourism and Education Center.

Watch out for bears as you drive along the scenic byway towards Barberville Pioneer Settlement. Buildings from the neighboring towns of Astor, Pierson, New Smyrna, Huntington, and Deland make up the Barberville Pioneer Settlement located at 1776 Lightfoot Lane in Barberville. Step inside the Main Office formerly the Bridge Tender’s house originally located in the town of Astor. Films about the scenic byway, and the River of Lakes Heritage Corridor. Artifacts displayed throughout the room. 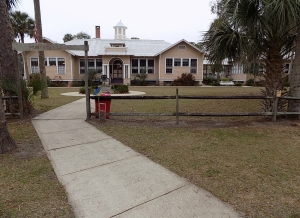 Barberville Central High celebrated its 100-year anniversary listed on the National Register of Historic Places. Walk through the corridors of Barberville Central High a Frame Vernacular Architectural style. See how students were educated in the early part of the twentieth-century. An early classroom, auditorium, an early kitchen with modern appliances of the era, and a teacher’s lounge. General education classes as well as classes in making Candles, Weaving, and Spinning all crafts taught to the students. Articles of clothing and objects exhibited throughout the school.

A Quarters House that people lived in while working for the turpentine industry. The post office originally located in the community of Huntington relocated to the Pioneer Settlement in the mid-1990s. Inside the Woodshop photographs of tools and a display table of different tools, a grinding stone used to sharpen the tools, and two styles of chairs. Art Nouveau and Art Deco two styles popular in the late 1890s and the early part of the twentieth-century displayed in the Pottery Shed. A turpentine still, a garden and the many buildings that comprise the pioneer settlement. Each building tells a story of early twentieth-century life.

Before leaving the settlement, stop in the main office for souvenirs. Handmade pottery, teddy bears, books on various subjects, and Christmas items. Workshops and demonstrations offered throughout 2019. Admission prices and hours of operation on the website.