Orlando Loch Haven Park located at 777 E. Princeton Street in Orlando. What is now 2.6 miles of urban trail formerly the Dinky train line that began service in the late 1880s. The Orlando-Winter Park Railroad owned the 6-mile train line that ran from Orlando to Winter Park eventually extended service to Oviedo and by the late 1960s service ended. 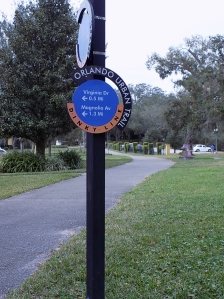 Whether its a 0.5-mile, 1.25-mile, or a 1.3-mile urban trail all lead to different areas in Orlando all part of the former Dinky Line. Lake Formosa an historic neighborhood established in the early part of the 20th century to Virginia Drive or Magnolia Avenue in downtown Orlando. 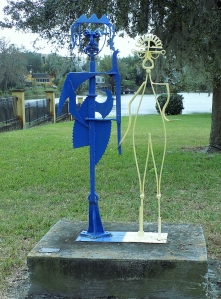 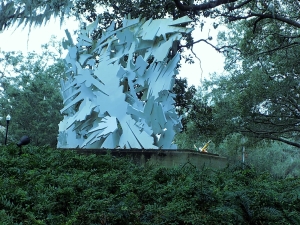 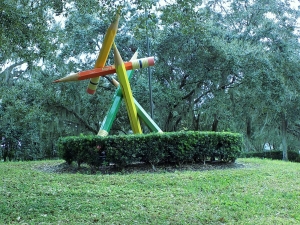 Relax in a lounge chair under a thatched hut, a lounge chair by the lake or on a garden bench under a trestle overlooking the lake. Stroll around the manicured lawn admiring the many sculptures that are part of the collection of the Mennello Museum of American Art and some gifted to the city of Orlando. Sculptures made of welded steel, welded metal, bronze and fiberglass with steel.

I recommend the park a relaxing way to spend a couple of hours. Afterwards, visit a museum or science center. 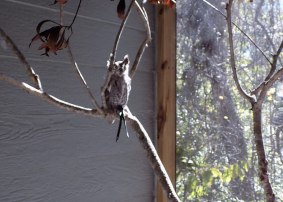 Meet the resident owls at Rotary Park located at 1899 S. Courtney Boulevard in Merritt Island. Boots, a 5-year-old Great Horned Owl who is not able to fly because of a mangled wing. Dora, a 7-1/2 year old Eastern Screech Owl that doesn’t fly because of a permanent wing injury. An in-depth article of Dora located on the front of her cage. 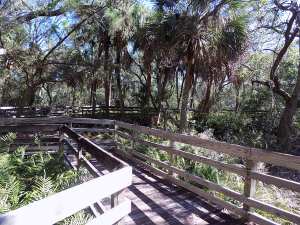 Listen to the sounds of rustling leaves as you walk along the quarter-mile boardwalk while admiring the variety of native Florida Plants. The Shiny Lyonia, Myrsine and Southern Red Cedar all evergreens. Some evergreens can grow up to 40 feet. The Muscadine Grape native to Florida grows on the trail. Pest tolerant that require little or no pesticides. Stop and read the interpretive signs about owls and their habitat.

Step inside the nature center for a look into the different species of Sea Turtles and Gopher Tortoises. Inside the aquarium, the Corn Snake likes to hide underneath the carpet for warmth. A diorama of animals some native to Florida. An exhibit on how to build a nest box for the five species of Florida Owls. An exhibit of artifacts on the eight vanished Florida native tribes. 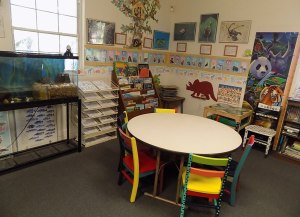 An educational area for children that include an assortment of books on American Wildlife, tropical rainforests and puzzles. Special programs for children include exploring the outdoors visiting wildlife habitats and various ecosystems. Bring a picnic lunch and sit under a pavilion. Free admission, donations accepted. Hours of operation on the website.