Grant Historical House often referred to as the Benson House a Florida Heritage Site at 5795 U.S. 1 in Grant. The docent took us on a tour of the house explaining the history and the inhabitants. Atley Benson built the 1,200 square foot Sears Catalog Home in 1916 that comprised the kitchen, living room, dining room and two bedrooms that cost $1,200 to build. The bathroom added in the 1940s included a claw foot bathtub, a pedestal sink and built-in shelves. Family photographs and keepsakes throughout the house. 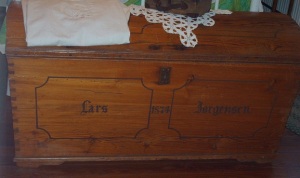 The Grant House converted to a museum in the late 1980s included original furniture pieces, some donated or bought. The bed and cedar chest both original pieces. The cedar chest belonged to the Jorgensen family from Denmark early settlers to Grant in the late 1800s. The docent told us that when the Jorgensen family came to America all the belongings that they brought were in the chest. 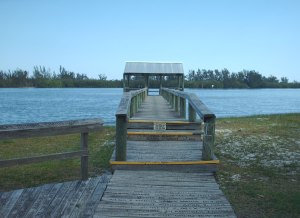 Walk along the engraved boardwalk that surrounds the house stopping to read the inscriptions. Bring a picnic lunch and watch people launch their canoes on the Indian River Lagoon or walk out to the edge of the pier, sit on a bench and watch boats go by on the lagoon enjoying a lazy afternoon.

This site uses Akismet to reduce spam. Learn how your comment data is processed.